In response to an article in NRC Next of Monday 11 June about the Dutch donor registration system, the Heart Foundation sent a letter to this newspaper. He was posted on Monday, June 18.

“Why does CDA not opt for this donor system? The waiting list for people waiting for a new heart has increased by 18 percent compared to May 2011. A possible cause is the so-called assisted heart, an implanted pump in the left ventricle that provides support for the control of the large blood circulation. This means that people, while on the waiting list for a heart transplant, live longer. A wonderful temporary facility, that heart support, which only increases the urgency of an Active Donor Registration System (ADR). read here further.

This letter is a response to this message in NRC Next:

NRC-Next checks: 'No more donors with another registration system'

The CDA thinks it wise of Minister Schippers that she does not want to introduce a system whereby someone is automatically registered as an organ donor, unless he objects. "This system does not automatically lead to more donors, as many people think," writes the CDA on the party website. "It turns out that countries with an 'active donor system' do not have much more donors than countries with another system." Reader Jogchum Pel, whose wife is awaiting a liver transplant, "can't believe this statement is true." The editors of next.checks finds out: does such a system yield more donors?

Next.checks and concludes: this statement is largely false. 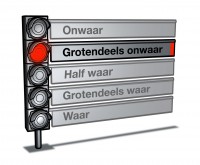